First off this is by far NO epic, but I think one of the questions I’ve ben asked about exploring in Bristol is ‘what’s down that door by Bristol Bridge’ or ‘ have you been down that door by Castle Park sticking out the ground?’… well finally after years in this game we managed to get into this tiny little obelisk which houses a staircase going underground.

I think potentially some of the old skool lot like @Speed / @dweeb / @Oxygen Thief got in here back in the day but never saw any pics.

You hear all sorts of rumours as to what’s down here. Things like a secret WW2 bunker, toilets, tunnels leading to the river Avon, secret MI5 office and even a potential cannabis farm. Well I can confirm that none of these theories are right. It’s a much more bland and anti climatic truth. It’s simply an old cellar that is believed to have been built in the 1300s or 1400s. It would have likely been used to store wine and other imports that came into the city via the river.

The staircase going down is the thinnest staircase I’ve ever used, and I can think of a few people who would seriously struggle to fit down it; I did! Although this is the only way in and out of it now, back when it was built there would have been another entrance which is evident from the change in brickwork in the cellar itself. It’s split into two sections, which have a rather different feel to each other. Rumour is that one section was for storage and the other (with the nicer brickwork) would have been a showroom of sorts.

Door, before and after someone went to town on it: 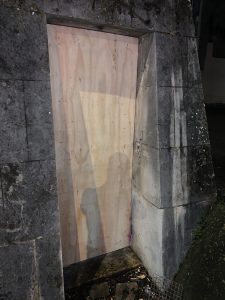 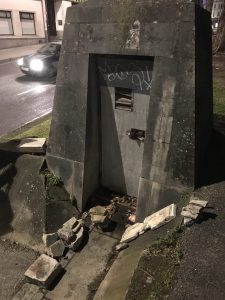 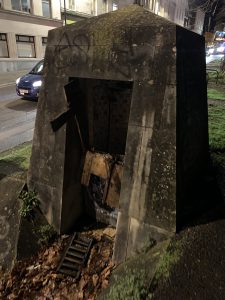