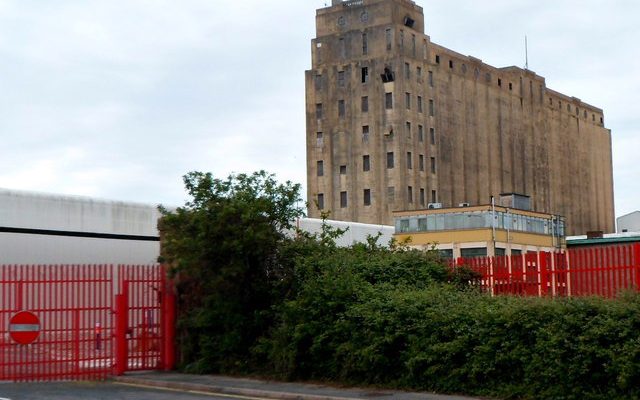 Spillers silo is one of three (previously four) abandoned structures on the Avonmouth skyline. It is the silo for the former Spillers mill which has been long demolished. After reaching the roof of Ford and taking in our surroundings, it became very clear that we could easily get to Spillers from there, without having to tackle any fences/security/cameras etc etc. The only thing it did entail is a dash across a rather large patch of open and floodlit ground. Bit bait, but either way, we went for it and boom – open door and we were in.

This is the one you’ll find the most amount of history about, it would seem. See this link for some more detailed information outside of a general summary: Engineering Timelines – Spillers Avonmouth Mill
The mill was demolished sometime soon after 1998 when it ceased operation, but the silo remains on the dockside at Avonmouth and is still there, derelict, to this day. The complex comprised of the silos, the mill and a warehouse. This Spillers mill was one of three of similar construction, the others being in Cardiff and Newcastle-upon-Thyme.