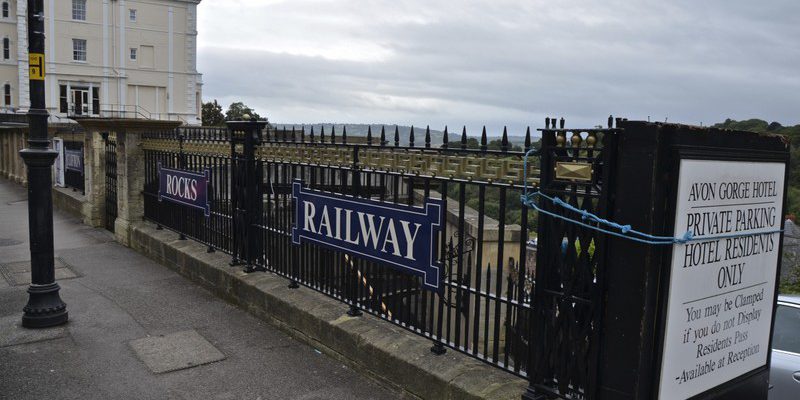 Construction of the railway was funded by the publisher George Newnes, also proprietor of the Lynton and Lynmouth Cliff Railway, and as at Lynton and Lynmouth the engineer was George Croydon Marks. It opened on 11 March 1893 and carried 6,220 passengers on the opening day. However, it was never a great success; in 1912 it was sold to Bristol Tramways, but it continued to struggle and closed on 1 October 1934.
The railway had a length of 450 feet (137 m), overcoming a vertical distance of 200 feet (61 m) at a gradient of about 1 in 2.2 (45%). There were four cars in two connected pairs, essentially forming two parallel funicular railways, each running on 38 inch (965 mm) narrow gauge tracks. The system was operated by gravity, with water ballast being let into the cars at the top station and out at the bottom, and an oil- or gas-burning pump returning the water to the top of the system.
During the Second World War blast walls were installed in the tunnel, which was used as offices by BOAC, as a relay station by the BBC (who also constructed an emergency studio there, though it was never put into use), and as an air-raid shelter. The BBC continued to use parts of the tunnel until 1960.

Most of us pass by the Clifton Rocks Railway without even knowing it is there. Constructed with great difficulty inside the cliffs of the Avon Gorge in order to reduce its visual impact on the picturesque surroundings, this funicular railway operated for 40 years against diminishing trade. Its closure before WW2 did not mark the end of its useful life as it became a secret transmission base for the BBC.
Behind the entrance is a tunnel cut through the rock which extends at a steep angle to emerge in the now derelict small triangle of ground between the junction of Princes Lane and Sion Hill, adjacent to the Avon Gorge Hotel. Within this triangle of ground is the upper Station which has long since fallen into a state of disrepair. The tunnel itself forms a straight and direct connection between the upper and lower stations. A Description Of The Original Railway. The tunnel is 500 feet long, semi elliptical in cross section with a roof height of 18 feet and a width of 27 feet 6 inches it climbs a vertical distance of 240 feet on a rising gradient of about 1:2.2, that is a vertical rise of 1 foot for every 2.2 feet of forward travel. The tunnel was blasted and cut through badly faulted limestone and was brick lined in almost its entirety with a wall thickness of 2 feet.

This has been something that I surprisingly have only just seen, even though Ive known about it for years. It is clear quite a bit has been done by the volunteers since Rooks reported on this back in 2008, and tumbles’ reports from 2009 & 2011. There is still much to do here, but it obvious they are working hard and it’s really good to see the dedication of people who look after the place in their spare time.

There are over 350 steps down from the top station and, of course, another 350 back up! It was certainly worth all that though!

A massive thanks to Maggie, who showed us around and has played an absolutely massive part in all the work which has been carried out ever since it was left after its last use.